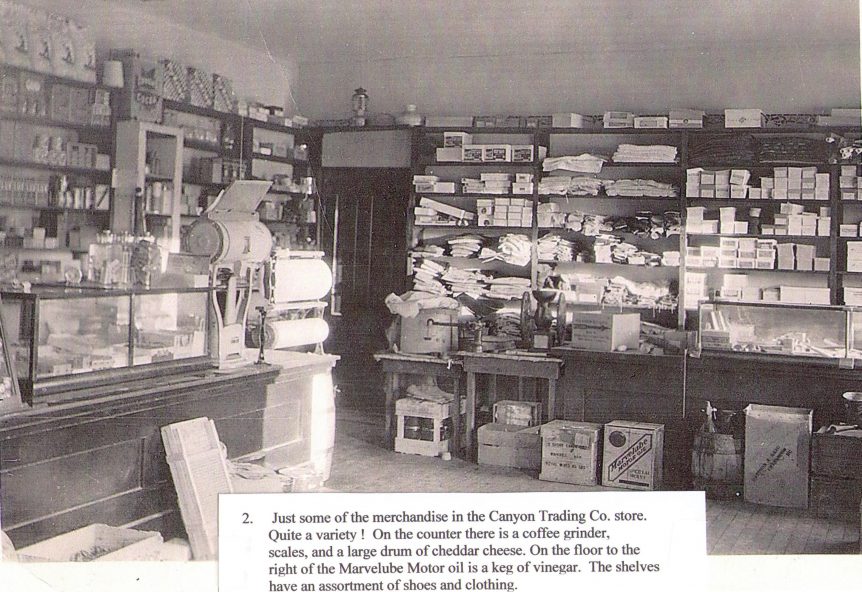 For today’s daily dose of history, let’s continue on with the Depression-era theme that we’ve been examining for the past couple of days. First, we gave you a bit of an overview on how it affected the Creston Valley. Then we challenged you to make your own piece of hobo art (and we’d still love to see what you came up with!). Now, let’s talk dollars and cents.

The photo at the top of the page shows the interior of the Canyon Store. Babs Jones, whose parents ran it during the Depression, told me that in those years, people often paid for their groceries with milk, eggs, cream, or butter that they produced on their farms. In theory, Babs’ parents could then sell those products to people who didn’t make their own, to cover the cost of the traded groceries. In reality, Babs said, her mother threw a lot of it away, especially the butter, because it wasn’t always well made and went rancid before she could sell it.

Imagine you are Mr. Speers, the owner of the Imperial Groceteria (which, in January 1933, was probably where the Advance is today. It moved next door to Morris Flowers in 1933, but that building wasn’t built until 1933 so the move was probably later in the year). The ad above shows the prices you are charging for a variety of goods.

Now, take a look at this little article of news from April 1935:

$750 is a fair bit of money even today! Think about how many hours (or weeks, or months) you would have to work in the 1930s to make that much money. What could you buy with it? Look for old catalogues or advertisements online to get an idea of what $750 could do. Just for fun, check out the Bank of Canada’s inflation calculator to see how much money that would be today! Could you buy the same things today?