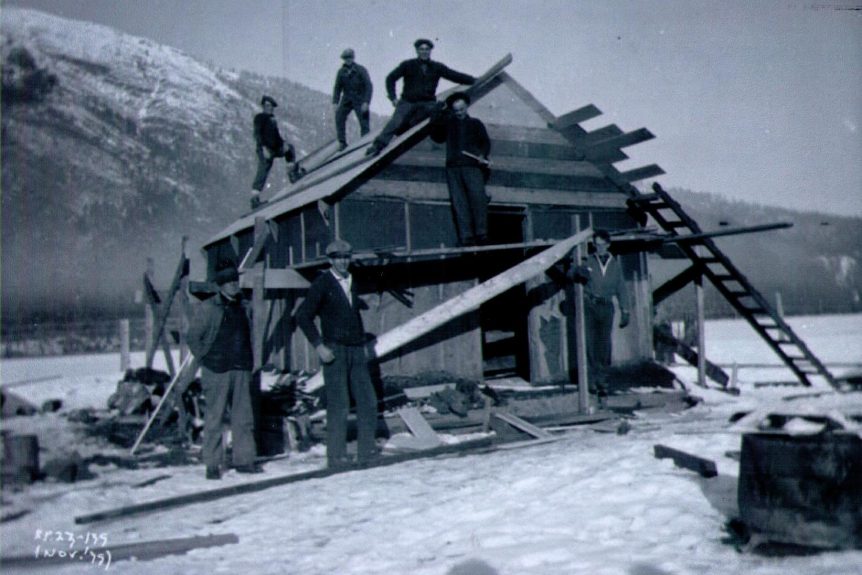 Black Tuesday: 29 October 1929, the day the New York stock market crashed. Prairie dustbowls, Bennet buggies, hobos riding the rails, relief workers striking. Most of the common images of the Great Depression of the 1930s come to us from the Prairies. But how did it manifest itself in the Creston Valley?

Here at the Creston Museum, we dug into that question in preparation for an new exhibit we presented a few years ago. What we found is a fascinating series of contradictions.

Almost everyone we’ve talked to, who was living here at the time, agrees: If you had a farm, you were doing okay.  There wasn’t any extra money, and you certainly didn’t have any luxuries, but generally speaking you had enough. There were many people – probably hundreds, in fact – who came here from the dustbowl regions of the Prairies, precisely because of the strong agricultural industry. And we’ve yet to find a local hobo story that doesn’t include a statement like, “Mother would always send them away with a bag full of fruit or vegetables from the garden.”

Clearly, Creston’s agriculture was as productive during the 1930s as it ever had been. But agricultural prices – and therefore farmers’ incomes – plunged by nearly 75% in the early 1930s, and didn’t fully recover until the end of the decade. Farmers, frustrated at their inability to make any money on their fruit, refused to harvest it at all. The 1930s are the decade of such slogans as “A cent a pound, or on the ground,” and that philosophy was as prevalent in Creston as it was in the Okanagan or any other fruit-growing district in the country. Train car loads of fruit were regularly sent from Creston to the drought-plagued central provinces. This is further evidence of the strength of local agriculture and the generosity of local residents – but the dark, underlying reality is that the farmers simply couldn’t sell their fruit, so they might as well give it away.

That huge drop in farm income resulted in a huge drop in farmers’ purchasing power – and that led directly to a drop in income for local business owners. We’ve heard many tales of storekeepers being paid in-kind – with homemade butter, firewood, and even cows and other livestock. The local hospital reported that a significant portion of its revenues for 1935 was in this kind of merchandise, and, according to his children, Dr. Murray “worked for groceries” during the 1930s. A number of businesses were forced to close by the harsh economic conditions, and many others broke with the tradition of allowing customers to charge their purchases – sales would be cash only until further notice.

There were a number of things that couldn’t be paid for in fruit or chickens – taxes, for example.  A family could have plenty to eat, and plenty to trade for things they couldn’t grow themselves, and still lose their farm because they couldn’t pay the taxes on it. The municipality ran work programs in which men could perform menial and maintenance tasks – filling potholes in the road, for example – in order to work off their taxes.  The province established relief camps in 1931; the federal government followed suit in 1932. Relief payments were also made to families.

But it was never enough. The federal relief camps paid only ten cents a day. The Village of Creston couldn’t always provide enough hours of relief work. Anyone who managed to earn some money over and above relief, saw that amount deducted from his relief payments. In November 1934, the local Relief Committee wrote a bitter letter to the editor, highlighting two of the most urgent cases in Canyon.  One family, with eleven children, was receiving relief payments that amounted to three cents per meal per family member; nothing more could be done for them, because relief was only paid for up to eight children.  Another family, who had moved to Canyon from Saskatchewan only a few months before, were starving because they were not eligible for relief – they hadn’t been resident in BC long enough.

Despite the bleak financial situation, though, fundraising activities continued throughout the 1930s.  The Ladies Auxiliary groups, Women’s Institute, and many women’s organisations remained very active, and were very successful in raising funds for sick children, poor families, and local services such as hospitals and churches.

In addition, there were a number of major projects, requiring large sums of money, that seem to fly in the face of the economic reality. The flats were – finally – successfully dyked and reclaimed for farmland in 1935. A new hospital was built, and the Canyon power dam constructed, both in 1933 – the worst year of the Depression. Irrigation systems were installed in local communities, using government grants and funds raised locally. A large hotel and a movie theatre were among the new businesses that opened during the 1930s. It is amazing to think of all this activity taking place in a region that supported at least ten federal and provincial relief camps.

What has been most remarkable is how very familiar all this seems. Reading the headlines of the 1930s is much like reading the headlines of today:  Concern over people shopping out of town, instead of spending their money locally.  Constant demands for better wages, more work, greater support from various levels of government. Battles between different levels of government over who had responsibility for the unemployment issues of the day. Public anger over cuts to everything from federal relief payments to provincial teachers’ salaries. Accusations that governments only made fine promises of change to get elected. And, from 1934 on, considerable talk about all the indications – new businesses opening, better markets for local products, and so on – that the economy was improving.