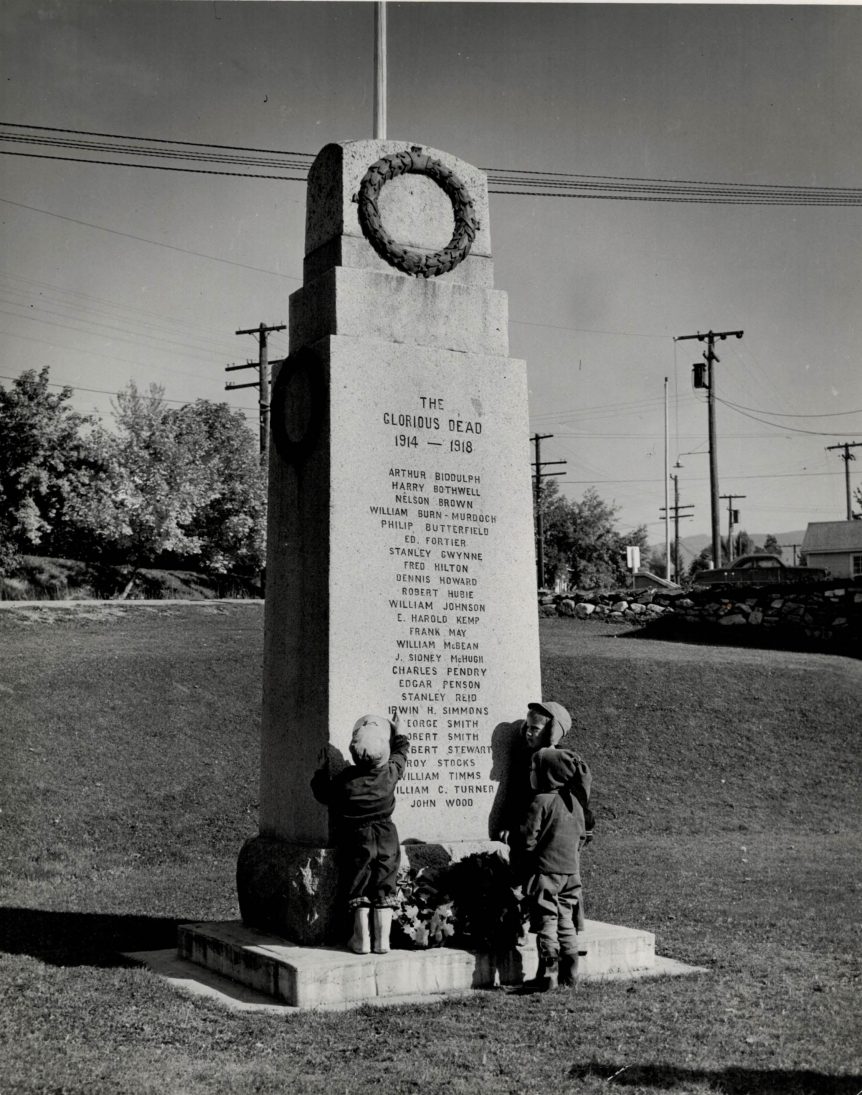 11 November 1922: The Creston Valley’s memorial to the Great War was unveiled during a moving and impressive ceremony. It was a moment several years – and considerable drama – in the making.

The first local memorial to the Great War was actually erected before the war had even ended. A wooden tablet, carved with the names of the nine local men who had been killed up until that time, was unveiled on 1 April 1917.

Looking back from our perspective, more than a century after that war ended, this monument might seem a little premature. But, all things considered, it makes perfect sense. By 1917, people had been fundraising and rationing for two and a half years. The grinding horrors of trench warfare were consuming soldiers faster than they could be recruited and trained. A bitter national election was in the offing, and whether or not Canada adopted Conscription would be decided by the results. The spring of 1917 was no time to let up on the war effort; if anything, it was the time to apply more pressure than ever. The wooden cenotaph, temporary though it may have been, was a daily reminder of the sacrifice many from the Creston Valley had already made, and a constant exhortation to the citizens to make sure that sacrifice was not in vain. As such, it takes its place among the Victory Bond campaigns and election ads that combine patriotism with guilt to motivate people to give, vote, or enlist.

Nevertheless, this was a remarkably early effort on Creston’s part: newspaper stories in 1917 and 1923 suggest that this may have been the first Great War memorial in the province. We’ll have to do some more investigating to determine whether that’s true.

This shrine, as unveiler Edward Mallandaine noted, was intended to be temporary. Within days, there was talk of committees being formed to plan a more permanent monument, and these discussions heated up as soon as the end of the war could be reasonably foreseen. And, as it turned out, this was a very divisive topic for the community.

First there was the question of keeping the wooden shrine decorated with flowers. Newspaper editorials call out one group after another for not doing enough in this regard: first the Women’s Institute (they have flowers a-plenty when they put on their flower shows; surely they can find enough to keep the cenotaph decorated!); the Great War Veterans’ Association (really, who better to do this than the comrades-in-arms of the fallen?); the population at large (if there’s such a paucity of flowers within months of the war ending, how disgraceful is it going to be in future years and decades?).

Then there was the question of where: The site of the original wooden tablet, on the corner where Cook Street now joins Canyon Street and 10th Avenue North, was seen by some as ideal, and by others as too risky for such a purpose given its proximity to the CPR’s proposed expansion of rail lines and freight sheds. An empty lot on Wilson Avenue (now Railway Boulevard) below the tracks had all the advantages of size and walls of neighbouring buildings where vines and climbing flowers could serve as a lovely backdrop – and all the disadvantages of being outside of what was rapidly becoming the central part of town. The final choice of a site – right alongside Canyon Street, at the bottom of what is now 11th Avenue North – wasn’t decided on until the summer of 1922.

But by far the biggest issue was the question of what should be put up. A stone monument? A building? A combination monument and horse watering trough? A public library and washroom? A number of suggestions fell by the wayside fairly quickly, and the discussion came down to a heated debate between the proponents of a stone monument and those who favoured a public library.

A public vote decided the matter in favour of a monument – but then a committee was struck to determine the size, design, location, and many other details, and quickly got mired down in yet more debate and discussion. It dragged on so long that ultimately, inevitably, those who had favoured a building began raising their voices again. On 1 April 1921, a letter from the Creston Library Board appeared in the Creston Review:

“As we know, the majority decided in favour of a stone monument, and a large number who would have preferred a building sacrificed their wishes and fell in with this idea. The committee appointed, however, have found great difficulty in the way of a stone monument. No one wants a poor monument, unworthy of their town, therefore if the majority cannot put up a worthy monument, surely it is not too much to ask what the minority have to offer in the way of a building. When a library is suggested Mr. Bevan writes as though he and his friends could get up a special memorial of their own. Is this playing the sportsman? Is this pulling together? No one wants two or three memorials, but what we do want is that all Creston valley should join in one memorial, whatever it may be.”

One objection to  the building idea was the cost of maintaining it – much more burdensome than “an artistic monument of imperishable stone.” The Library Board addressed this concern as its letter continued: “The Creston Public Library has come forward offering to take responsibility and provide funds for the repair of a library memorial building if it be put up. A local architect has designed for us an exceedingly handsome building. It provides a mere corner for the library as at present constituted. It provides a home for the machine guns, and a home for two brass plates, and whatever memorial of the War that may be selected and got together.”

Clearly, the Library Board was convinced a building could accomplish both objectives – library and memorial – that a stone could not. They certainly had a point. But we do have to wonder just why they were so convinced that a stone monument would be “poor,” somehow laughable and forgettable and altogether not what should represent the sacrifices of war. That they very clearly did think so is evident in the conclusion of the letter to the editor: “Too many marble piles today call for the stare of curiosity, nothing more. A poor stone monument would have no dignity; a handsome memorial library would at least have that, and would at the same time do good in and for Creston.”

In spite of – or perhaps because of – this rhetoric, the final decision in favour of a monument was made shortly after this letter appeared, and on 8 July 1921 the Review was able to report that the design, site, and even building materials had all been determined.

Our current cenotaph was unveiled on Remembrance Day 1922.

Need some inspiration for recognising Remembrance Day this year, with the public ceremony cancelled? We have some suggestions for you.