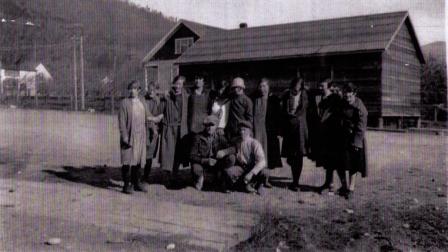 Today’s Daily Dose of History is inspired by a project that co-worker Alyson is tackling. As always, since we want to give you something to do, we’ve got a couple of questions for you to ponder.

We’re all probably familiar with this famous recruiting poster showing “Rosie the Riveter” ready to tackle any job in any munitions, armament, or airplane factory in World War II. This is an American recruiting poster, but Canada had similar ones – women being asked to serve their king and country in traditionally male roles, all in support of the war effort. If you’d like to know more, here’s a fifteen-minute video from the National Film Board.

But when the war was over, women were asked to go back to their traditional roles in the home. That image of life in the 1950s – apple-cheeked children playing freely, wasp-waisted Mother in her full skirts and spotless apron smiling from her kitchen, Father in his suit and hat coming home at 5:30 to dinner fresh and ready – is idyllic, but it came at the cost of that freedom and independence women had during the war years.

Alyson’s project explores how women felt about that change. She says, “Do you have any stories from your mother, grandmother, etc. who temporarily took on a “male” job while the men served overseas? Did she ever comment on transitioning back to her traditional gender role post-war? We’d love to hear what you have to share!”

So, your task for today’s daily dose of history, should you accept it is:

Tell us in the comments, or email Alyson at MuseumCurator@telus.net