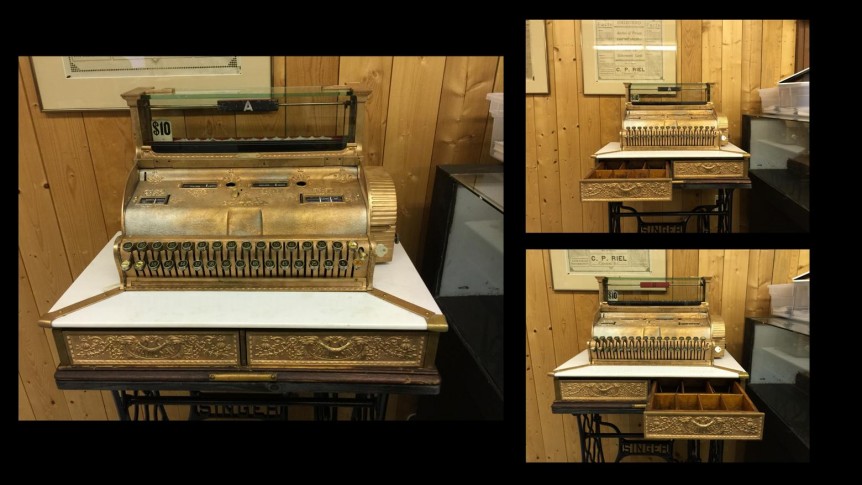 Before I get started on this post, I am going to pre-apologize for the potentially extravagant energy that may erupt from your internet accessing device.

Take for example, our brand new donation box. Now, first thing that probably comes to your mind, is “a donation box. I just saw a video of a cat riding a tortoise while wearing a hat. you can’t tell me this is more interesting…”

oh, but I can tell you this is more interesting!

Because, do you remember when we did the great typewriter purge? Well, while we were clearing all that mess out, we also found a ginormous cash register. Do you remember that? Skip took this project rather head on, and when he bites into something, well…there’s no stopping until it’s done. He has this talent of tracking pieces and parts to get the job done, so over three months of puzzling and tinkering and probably cussing, etc…and eventually all that came together into one grand fantastic masterpiece! This one (I am assuming) came from a bar; [as you can see, there are pint and quart buttons…[kind of a handy way of keeping track of the days sales eh?] Unfortunately, this is one of the Yahk collection, so there is ZERO ZILCH ZIP information on it. Which is too bad, because that kind of brings a lot of what I can write about it to a screeching halt. But, that is where this next item differs!

I have to say, I am just so giddily excited for this project I can hardly contain myself. After restoring the windows for the homestead last summer, I have caught the bug. BIG TIME. There has always been this borderline obsessive corner to my personality, and certain pieces of furniture most certainly pull that lever with zest! There is just something about certain pieces that say ‘at one time, I made a house a home’. LOVE IT… Take for instance monster old, worn, wooden wardrobes or armoires. They make me bubble up inside with glee more than I should probably be admitting. Or, occasionally a beautiful old sideboard…you can just picture decades and generations of family meals held in the dining room it adorned. I think perhaps that is why I fell so hard for this next little guy. We are lucky enough to have a photo of it in it’s original state, and, well…you can see its current state. You all know how much of an addiction to Pinterest I have…but ~to me at least,~ it seems like just such a shame when beautiful things are chalk painted. Here’s why…

This sideboard was built in the 1930’s by ‘Grandpa Arrowsmith’, aka. Osmond Thomas Arrowsmith; a member of one of the original Creston settler families as a gift for his wife, and then later as a wedding gift for their daughter. He cut the tree on family property, axe hewed and hand planed the lumber from it himself, and built the sideboard himself. It stayed in the family until the last owner passed. Unfortunately, due to some paperwork snags, her belongings were dispersed. This is where someone in town picked it up, because, well, who could blame them, it’s gorgeous…but then chalk painted it for re-sale. The lucky thing about living in a small town however, is that people know people, so eventually the original family were able to re-obtain it, and brought it to us to restore and use in our brand new homestead that was built last summer!

Now, I will admit, in certain lights the colour is kind of starting to grow on me; after all green is one of my favourites! but I kind of just can’t love it as much since it is on an approaching-antique piece of furniture whos’ original finish was in pristine condition.

Are you ready for this though? The funnest part… Check out the bottom of the drawer… That’s right. The lot where the tree was logged, and information about the man who built it, who he built it for…so cool. And it is in AMAZING shape! You would never know that the thing was built and used through the 30’s on! There is even a picture of the very tree that was used to make it hiding somewhere that hopefully we will soon have a copy of to accompany the piece. This guy had some serious fore-sight! I, at least, think that’s pretty cool.

Now that I think of it, have you ever seen lumber being hewn by hand though? Here is a fantastic Scandinavian video  showing a craftsman doing planks from scratch. Although I can find my way around splitting firewood and whittling a little something, I feel like there just might be body parts missing if I attempted this. Or quite possibly a new and strange sort of piercing. Although I’m not sure an embedded axe head really counts as a piercing…more like a useless, if not slightly painful, appendage…so perhaps it’s best I just watch and focus on getting the wood that was so labourously harvested and shaped back into it’s original beauty 😛

HERE is a link to another craftsman explaining planes, (how you smooth out the rough lumber before the step of using sandpaper)

So, since this very post is about restoring things, I think that I will chronicle my adventure in restoration…hmmm…yes…I think I will do just that!

Aaaaaaaand since it will have been present/past me who wrote this, future me will return to this post and put the link to the chronicling future post so that you can read this, then check back here for the new link to read all about the adventure of restoring the sideboard!! So until that time, I hope you enjoyed your read, and I’ll see you soon!