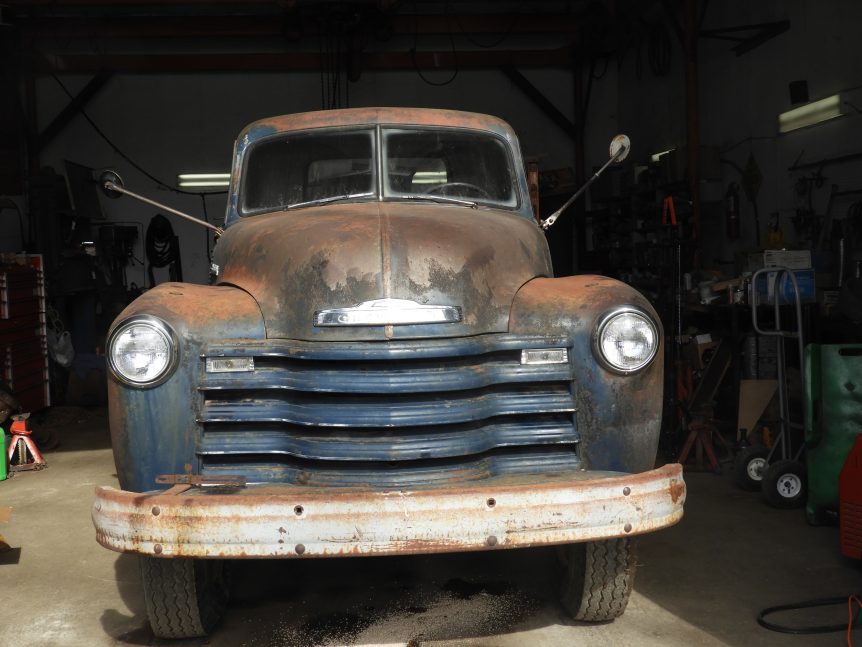 This is the 1947 Maple Leaf flat-deck truck that Lloyd Bell donated to the Creston Museum in July 2016. Last fall, we announced our intention to get her running and road-worthy again, with the goal of showing her off in the Blossom Festival parade in May 2018 (click here to read that announcement).

She’s running! And moving! And turning! And stopping!

We have video! Click here to watch this wonderful old farm truck motoring out of Walt Pozniak’s shop, cruising up the road a ways, then turning around and coming back. Yes, a very short trip, but everything did what it was supposed to do, and it’s very exciting because this is pretty much the first time in about 40 years that she’s been able to do all that!

Is she ready for the parade? Well, not quite – but getting really really close. As you can see, the wooden deck still needs to be replaced. Even this short drive revealed a couple of mechanical things that need to be fixed – the motor mounts, for example – and she was leaking some antifreeze so we want to make sure we’ve got that fixed. The cab mounts need some urgent attention, and we’ll patch the floorboards of the cab while we’re at it (being able to watch the road going by through the floor of your truck is not a good thing!). To be really legal on the road, she should have new mirrors, because you can see nothing in the originals, and the speedometer needs to be replaced. The matching one on the driver’s side is missing…we’d love to replace it!

We also want to seal the exterior of the cab. We won’t repaint it – or fix that dent in the right fender – because that’s all part of her character as an old farm truck and we want to preserve that. But a clear coat will preserve what’s left of the original blue paint and help keep her from rusting further. And we would love to replace the “Maple Leaf” name plate that’s missing from the driver’s side of the hood.

We’re within about $1,500 of being able to do all that. If you would like to help us get there, click here to make a donation on our secure CanadaHelps fundraising page. If you prefer to donate by mail or in person, our address is 219 Devon Street, Creston, BC V0B 1G3.

With special thanks to Lloyd Bell for donating the 1947 Maple Leaf to us, and to Len Messinger for setting it up.