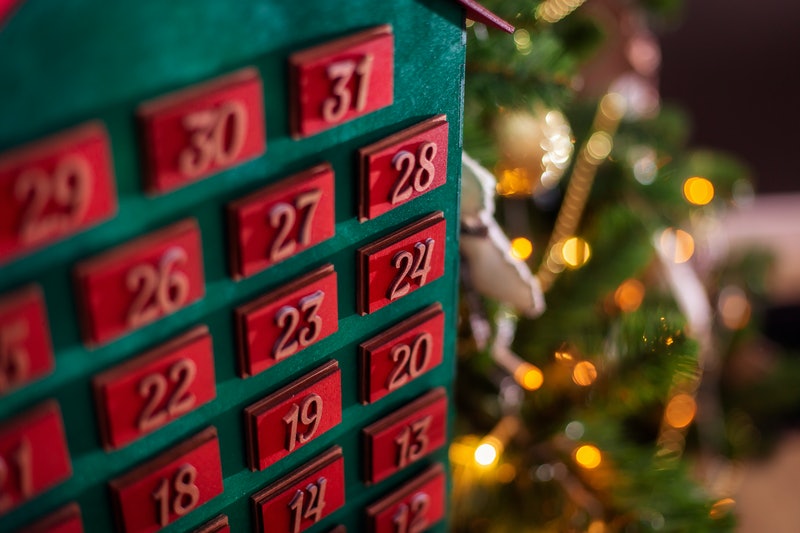 Today, we think of Advent – or, more specifically, Advent calendars – as a way of counting down the days until Christmas. But this little newspaper snippet from November 1927 hints at a rather different Christian tradition, one that goes back to the 6th century: the preparations for and anticipation of the Second Coming of Christ. It wasn’t until the Middle Ages that Advent became associated with the anticipation of Christ’s birth at Christmas.

By the time Advent calendars came on the scene, this later tradition was well established. “Calendars” started simply, in Protestant Germany; by the early 1800s, people were burning candles, marking chalk lines on walls, or hanging small religious pictures to mark the days until Christmas. The Advent calendar that we know today – with little doors hiding a treat or message – appeared a century later.

Advent calendars typically have 24 doors, one for each day from December 1 to December 24. But, in the Christian tradition, Advent starts four Sundays before Christmas day – any time between November 27 and December 3. This year, for example, Advent began on November 29 (26 days), and in the example from the newspaper above, it began on the 27th in 1927 (28 days). However long it lasts, though, the key theme of Advent is anticipation. Which brings me to my creative holiday celebration idea for today.

For me, one of the best ways of dealing with feelings of uncertainty and isolation is to find something to look forward to. And what better way of doing that, than with a daily dose of anticipation? So today’s challenge is: Make Your Own Advent Calendar.

There are a bazillion websites that will give you advice and ideas if you’re stuck for inspiration, but really, all you need are enough little compartments to give you one for each day: little boxes, bags, cards, pockets on a piece of felt, canning jars – anything you can think of. Decorate them, write the date or number on them, and there you go!

What to fill them with? Well, there’s the fail-proof standby of chocolate, of course. But what about a daily challenge? Write little notes on a piece of paper with something to do each day. It could be as simple as “Hug a family member” or “Go for a walk.” It could be an opportunity to challenge yourself to do something you’ve always wanted to do, but never felt confident enough to try.

If you’re on your own for the holidays, write the challenges on folded pieces of paper, then shuffle them and put them into your Advent containers randomly – that way, you won’t know exactly what’s coming next. But if you can, get someone else to write your challenges and put them in the calendar for you, so you really have no idea what you’ll be doing on any given day.

The beauty of making your own calendar is that it can be any length you want, and build up the anticipation to any event you choose. Don’t celebrate Christmas? Make one for whatever holiday you do celebrate, with all the appropriate imagery. Got something special planned for a day other than Christmas day? Make your calendar to lead up to that something special instead. Feeling a bit blue and lonely because of all the changes to our lives this year? Understandable – make a calendar that lasts a week and celebrate making it through to Saturday. The daily challenges, especially if they involve doing things for someone else, will definitely help with the time in between.

And, for double the fun, put your favourite Christmas treats in the calendar, along with your daily challenges. That way, you get the anticipation of the challenge in the morning, and the reward of the treat in the evening after you’ve completed the challenge.

We’d love to see what you come up with!