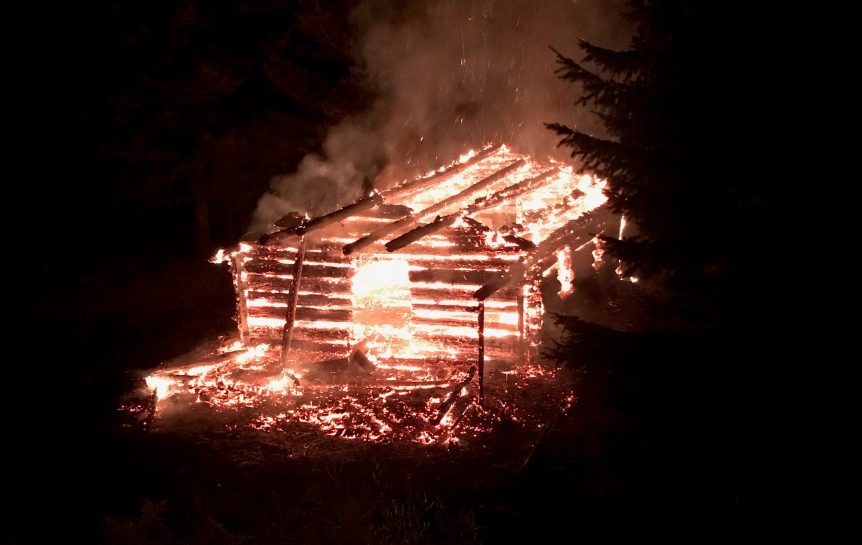 In the early hours of the morning on Tuesday, 29 September 2020, Jay Olson of Countryside Home Transport in Cranbrook was heading over the Salmo-Creston highway. He stopped in shock to take a few photos and a minute and a half of video of a sight he – and many other residents of the Kootenays and beyond – hoped they would never see.

Jordan’s Cabin, beloved landmark for travelers and residents for decades, was on fire.

Jay contacted us this afternoon, offering to share his video with us.

As might be imagined, we’re getting a number of comments and inquiries about it. Here’s a brief history, and some photos and newspaper articles from our collections.

Ed Jordan, who was of Irish descent, was born in Peterborough, Ontario in 1875.  In 1918 he arrived at Salmo and for a few years mined there, later moving to the Bayonne Mine.  Here he met Edward Peters known as Pete the Packer.  After Peters’ passing in 1923, Ed took over his place at Summit Creek.  The cabin was well built and located where water and firewood were easily available as well as being adjacent to the Dewdney trail.  During the winters he trapped and was packer for the Bayonne Mine until it closed in 1929.  After this period Ed spent all his time trapping, gardening, and prospecting.  He would come to Creston about every two months in the summer for supplies but in winter would remain up Summit Creek.

A few years later Ed built a second cabin at Topaz Creek, also adjacent to the Dewdney trail, between his home and Creston Flats, so he could have a stop over place on his long trips for supplies to Creston.  This cabin at six mile and the original at twelve miles where Ed lived still stands and is bordered by the Creston-Salmo highway.

Around the 15th of September 1942, William Hintz and his son Earl, on a prospecting trip up Summit Creek noticed no activity around Jordan’s cabin and on investigation, found Ed Jordan dead inside.  They immediately returned to Creston and a party was formed of Arthur Hurry, Herb Couling, Constable William Lemm of the BC Police, Harry Benney and Bill Cartwright, Game Warden; all personal friends of Ed.  This party went in on horseback to view the situation and found a diary of Ed Jordan which stated he had hurt himself internally, he had laid for about a week in pain and with no hope of assistance coming, he shot himself with a 22 pistol in the right temple.

His last words in the diary were “good-bye friends – I am going to resort to the gun.”  Ed Jordan passed away August 27, 1942 at the age of 67 years.  With the finding of the diary, Police Office William Lemm was satisfied there was no foul play involved and proceeded with the burial [alongside the cabin].  Art Hurry made a rustic cedar cross which was placed at the head of the grave.