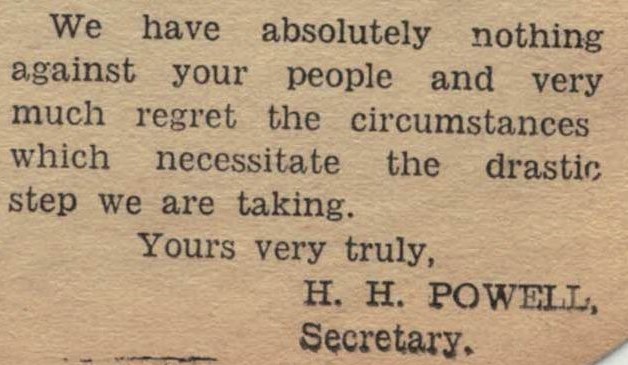 Imagine you have received this letter:

Yes, this is an actual letter, dated 18 June 1947, written by the Creston Valley Hospital Board and published in the Creston Review.

Now, when you read “your people,” envision whatever category of people you happen to consider yourself as belonging to. Men. Women. Elderly. Youth. Tradespeople, professionals, yoga instructors…whatever. Imagine this letter was written to you, telling you and others like you that you needn’t bother going to the local hospital in a medical emergency.

What is your reaction? Are you outraged? Are you feeling discriminated against, despite the Hospital Board’s assertion to the contrary? Are you flabbergasted that the Hospital Board found it necessary to distinguish between “you” and “us” no fewer than six times in as many sentences – and implied that “you” are a bunch of freeloaders in the process? Are you fuming because the Hospital Board is forcing you to take the brunt of wrongheaded government policies, instead of working to change the policies themselves?

Of course you are – and you should be.

What if I told you that the letter was, in fact, addressed to the Chief of the Lower Kootenay Band? Are you still outraged? Or are you more inclined to shrug your shoulders and dismiss it as “just the way it is?”

Creston Valley’s history is littered with this kind of systemic racism and cultural intolerance. Newspaper editorials admonishing people for patronising Chinese laundries. Internment of the Kamo family of Canyon during World War II. Outcries against the employment of “coloured” waiters in the CPR dining cars. Anecdotes poking sly fun at “Hindoo” workers in early logging operations, allegations against the honesty of ethnic people, signs above café doors and water fountains saying “whites only.” And all of it, like the discrimination of the 1947 Hospital Board, dismissed with a shrug of the shoulders and the comment, “That’s just the way it is.”

Today is the International Day for the Elimination of Racial Discrimination. A big step in doing that is acknowledging that “history,” as written by settler societies, is racist – often blatantly, sometimes subtly, but always and pervasively racist.

We see statues being taken down and schools renamed with dismay, and complain that “our history is being destroyed.” But is it really “history” that’s being removed and rewritten? Or is it merely the destruction of what a colleague recently called “hurtful glorification?”

So, today, I would like to challenge everyone to consider “history” from the perspective of someone other than yourself. Someone who is not like you.

It’s an 80-page book that tells BC’s story from the perspectives of the First Nations peoples, the Chinese, Japanese, Sikhs, and other groups whose presence and role and impact over the past 150 years have made this province anything but “British.”

This book is available for free download. It’s being officially launched today, at 3:00 PM, via Zoom – a chance to meet the authors and hear their perspectives and experiences first-hand. You can register for the launch by clicking here.

Let’s talk about that.