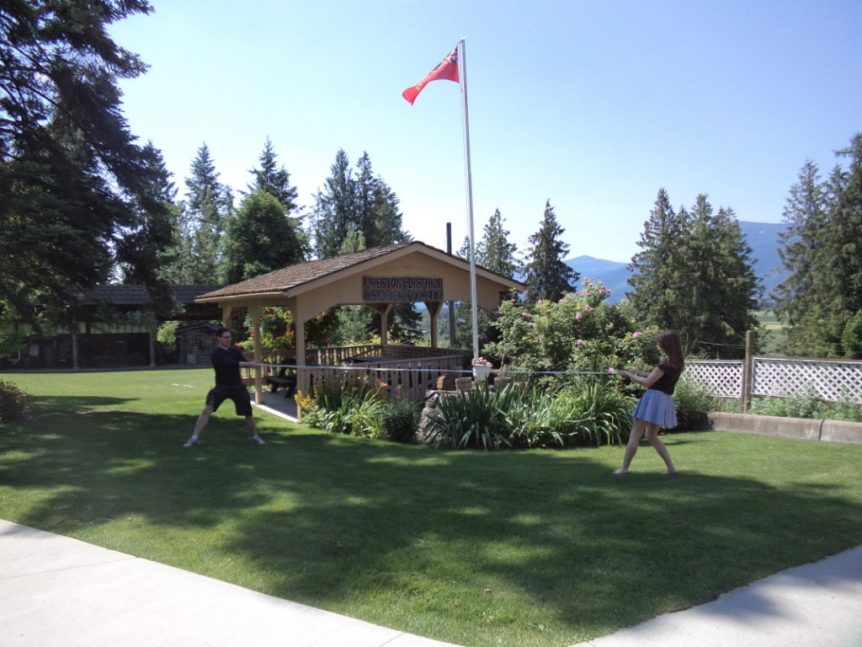 Yes, the Creston Museum is open today! Join us between 10:00 and 4:00 and share your stories of this little corner of the country!

We’ll get things started with a look at this history of the Canadian flag.

“The feature event of the week on Parliament Hill was, of course, the flag raising ceremonies. Tens of thousands of people gathered to view this historic pageant; lowering the much-revered Red Ensign which has served as Canada’s flag since 1945, and unfurling of the contentious but colourful and distinctive symbol, The Red Maple Leaf.”

So wrote Jim Byrne, MP of Kootenay-East, in a column about the inauguration of the Canadian flag on 15 February 1965. It was the culmination of a long struggle to create a national flag for Canada.

This was no easy task. In the 1920s and the mid-1940s, political leaders had attempted to find a design for a truly Canadian flag, but had always given up because no one could agree on appropriate symbols to put on it. In the early 1960s, Lester B. Pearson decided to try again.

For those who may have forgotten their high-school history, there was a lot going on in those years. The Quiet Revolution was happening in Quebec, giving rise to threats of Quebec secession and a consequent backlash of negative opinion in English-speaking Canada. Canada was gaining increasing importance in international affairs (most notably, the Suez crisis in 1956), at the same time as the British Empire was being deconstructed (not an easy thing to accept for many Canadians who had grown up within the Empire). In addition, Canada was becoming much more aware of her multicultural nature, a radical departure from the “We’re-all-sons-of-Britain-except-for-those-people-in-Quebec” outlook that had defined the country’s society and government in earlier times.

And Pearson set out to create a flag that would represent all this without ticking anybody off. He got the flag, within the two-year deadline he’d imposed – but he was a little less successful at the not-ticking-people-off part.

In May 1964 Pearson asked Parliament to adopt his favourite design: the “sea to sea” flag, with three joined maple leaves on a white background between blue borders. The debate over this proposal got a little, shall we say, heated. Objections were raised about the colours (too British), the lack of the Union Jack (not British enough), and everything else that could possibly be objected to.

Colonel George Stanley, then a teacher at the Royal Military College of Canada, suggested the red-and-white maple leaf design. Inspired by the College’s flag, it incorporated colours that were often associated with Canada, and the maple leaf which had been a symbol of the country for more than a century. After much argument and a healthy dose of political manoeuvring, that flag was finally raised over Parliament Hill in February 1965.

As far as I have been able to tell, the Maple Leaf flag was first raised in Creston at the elementary school (present-day Adam Robertson Elementary) on 26 March 1965. In a formal ceremony, with “The Maple Leaf Forever” sung by the school choir, the Red Ensign was lowered and the Maple Leaf raised in its place.

Did the formal adoption of the Maple Leaf flag end the arguments? Not hardly. In mid-March 1965, the East Kootenay zone of the Royal Canadian Legion held a convention in Creston, and amongst the topics under discussion was “the flag question.” Legion members were informed that “Canadians have to accept this flag, but where a veteran dies a choice of any of the three flags can be used at his funeral, namely, the Union Jack, the present flag, and the Red Ensign.” I’m sure there was plenty of discussion in other circles about the merits of the Maple Leaf compared to the Red Ensign.

That Red Ensign was at the root of some of the strongest objections to Pearson’s sea-to-sea design and the Maple Leaf flag. In fact, there was a large contingent, led by Opposition leader John Diefenbaker, who objected to any design except the Red Ensign.

Whether the Canadian Red Ensign was ever Canada’s official flag depends on which website you care to consult. Technically, the Union Jack was the official flag until 1945, and after that the Red Ensign was officially used on government building and schools, with either the Ensign or the Union Jack being used, according to personal preference, everywhere else. Unofficially, though, the Ensign was very widely used ever since Confederation: on recruitment and election posters, on government buildings in foreign countries, on ships, in battle, on private buildings, and in many, many front yards.

The Red Ensign is a red flag with the Union Jack in the top left corner and a shield, representing Canada, on the fly. The shield has changed over the years; until 1921, it consisted of emblems for each of the provinces. Every time a new province was added to Canada, a new shield was created for the flag. The Union Jack represented the close ties with Britain and Canada’s place within the British Empire; the symbols on the shield represented the expanse of Canada, her people, her industries, and her origins.

With so much history behind it, it’s little wonder that the Red Ensign was a “much-revered symbol” and that its relegation to the status of “the old flag” in 1965 met with opposition and resentment.

The tone of that article from March 1965, about the Legion meeting, sums it up. Canadians “had to accept” the new flag, whether they liked it or not. Unlike the Union Jack and the Red Ensign, it was merely “the present flag” – no descriptive title to evoke feelings of patriotism, loyalty, and a sense of belonging to something greater than oneself.

Fifty years later, we’re as fiercely patriotic about the Maple Leaf flag as anyone was about the Red Ensign. And we still have a symbol to connect us to that larger history: the maple leaf in the centre of it. Since Confederation, every semi-official Canadian flag (with the exception of the Union Jack) has borne the maple leaf. The preferred designs in those unsuccessful attempts at a national flag centred around the maple leaf. Even the Red Ensign, regardless of the design of its shield, has always included a maple leaf or two.