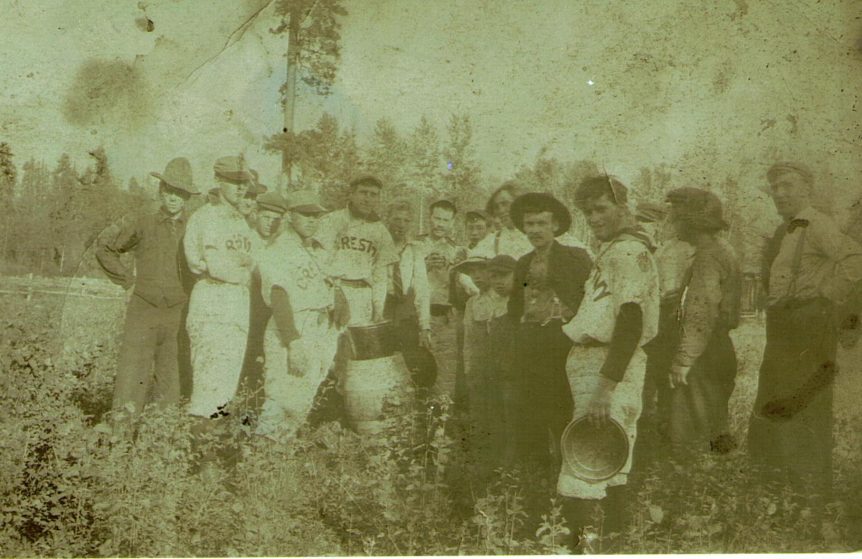 …until somebody loses a fence.

Yes, lots of things are closed or cancelled right now – but that doesn’t mean there’s nothing to do! Today, for your daily dose of history, we bring you an article about home-made fun. Join in the conversation with your stories, photos, and videos of your own home-made fun!

One advantage to working in a community museum, with volunteers who have lived here most of their lives, is that you get to hear some pretty great stories.  Lately, they’ve all been about home-made, home-grown, outdoor fun.  Here are a few examples:

Ian and I got to talking about the Fall Fair one day.  “One year,” he says, “I told Dad that I thought we should put something in the Fall Fair.  I went out, and got one of Dad’s sizers – he’d cut a hole in a piece of wood, and you’d hold it under each pear.  If the pear goes through, you leave it; if not, you pick it; then you’d go around and do your second pick.

“Well, I went through that whole damn orchard, holding this sizer under every pear – I was crawling under branches, and up on top of ladders, everywhere, trying to find pears that were big enough.  Then I had to find ones that had the right colour!  Finally, I got eight or ten – however many had to be on a plate – and entered them in the Fair, and I took third place.  I thought I’d done pretty good to find my pears, but I guess there were a couple of guys who’d picked them over a little more carefully!”

Okay, Ian’s laughing about it now, though it sounds like he might not have found it much fun at the time!

Lew was commenting the other day about how things have changed since he was a kid, or even since he was raising his kids.  “In those days,” he said, “ you didn’t worry about the kids going off on their own.  There was always someone around keeping an eye on them, and you knew they’d be getting hungry around dinner time, so they’d be home.”

And what were the kids doing while they were gone?  That, of course, would depend on the season, and in winter the obvious choices were sledding and skating.  Anyone with a pair of skates or skate blades – the kind that tied onto your boots – could skate on Duck Lake or on any of the channels and sloughs alongside the river. “We could skate actually from Creston to Wynndel,” Bill told me some time ago.  “You would skate on one slough and go across the ridge and get on another and skate some more.”

With the number of steep, long hills in the area, sledding was everywhere – from the top of Crawford Hill, or from what is now Adam Robertson School, all the way down, across the highway, and onto the flats (obviously, traffic was a little less heavy in those days!).  One of the school teachers, a Miss Wade, was persuaded to try it one day, and wound up breaking her leg in the process.  These trips were so long that, once you flew down and climbed back up, you’d often only have time for one or two runs a day.  Years ago, Erickson Road also provided sledding opportunities.  “It has been filled in in places,” Eileen said.  “It used to run downhill all the way from Dad’s place near Craigie’s to Highway 21, and we could toboggan all the way down.”

Downhill skiing was also an option for a brief period in the Creston Valley.  The Wynndel Ski Hill operated on Cory Road from 1952 to about 1954.  It had a tow rope run off the back axle of an old truck, and, while it wasn’t a very long slope, it was a lot of fun while it lasted – being on a south-facing slope, of course, the snow melted pretty early in the spring.  “There were a lot of trees and brush on it, and we figured if we could make it all the way to the bottom without hitting anything, we could really ski,” a visitor to the Museum told me one day.  “But then we decided to go over to the big hill at Whitewater one day,” she adds, “ and discovered that we really couldn’t ski at all!”

In summer, swimming was always an option.  Eileen, who lived next door to Craigie’s Ranch, recalls the swimming pool they built there.  “It was free swimming, no lifeguard, just come on over,” she says.  “Mr. Craigie  had the water coming out of the pipes, and it trickled over a sheet of corrugated metal lying in the sun – that’s all there was to heat the water.  The sides of the pool were wood, and the floor was just dirt, four feet deep at one end and seven or eight at the other.  There was a spot among the trees over here for the girl’s change room, and a spot among the trees over there for the boys, and nobody dared try to go to the wrong spot!”

Sometimes, outdoor fun was all about opportunity.  Cyril told me once about sailing down the flats during the flood of 1948.  There were fourteen feet of water on the flats, covering the farmland, at the end of Pump Road in Wynndel, so the flood provided a great opportunity to go sailing.  He and a friend, he says, built a little sailboat and off they went.  “Mr. Vickaryasz built the stone house along the Lower Wynndel Road.  He had three daughters, all very pretty, and I guess they had decided that with the road under water, they could do a little topless sunbathing.  Well, we come along in our sailboat, and you never saw three girls get up and dressed so fast!”

On the downside, though, the rudder of Cyril’s home-made sailboat had hooked the wire of a fence as it passed.  Because the ground was completely saturated with water, the fence posts pulled out really easily.  Cyril and his friend had gone several miles before they noticed the fence and posts trailing along behind them – and had to go back, when the water receded, to put the fence back in.