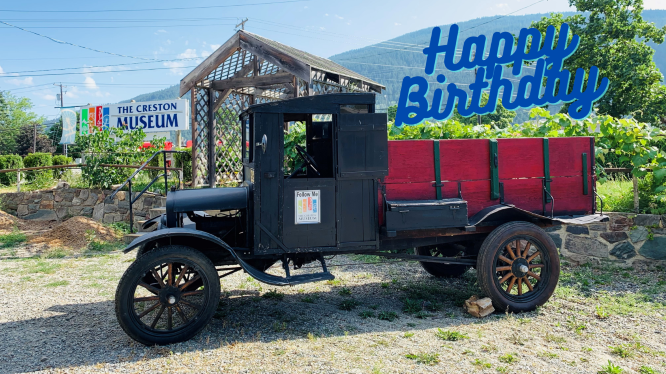 Derry is a 1921 Ford Model TT one-ton truck who spends his days at the Creston Museum. This truck was only manufactured and sold with the chassis. The Derry brothers had to build the rest of the truck, which they did with scrap lumber and an old grain wagon for the truck box. The Derry brothers also decided to gear the truck with an auxiliary transmission, giving him seven forward gears and two reverse gears.

The Museum named him after the three Derry brothers who bought him in September of 1912, George, Joseph and Robert Derry. He was originally purchased in the United States and driven up to Saskatchewan for use on the Derry’s farm. The brothers then brought him over to B.C. in 1936 to be used on their newly acquired 30-acre farm in Canyon. Derry has been in the Creston Valley ever since.

This July, 2021, we celebrate Derry turning 100! He has had a long life filled with adventure and we want to showcase all that he has been through. With the help of volunteers lending their mechanic skills we have been able to get Derry up and running again; yes this 100 year old guy still gets around. The Creston Museum will be driving Derry downtown every Saturday, between 9am-1pm,  in July to celebrate this grand milestone; and we want the Creston Valley to join in on celebrating this amazing well aged senior.

We would like to thank Jim, Walt and Skip for lending their mechanic skills to get Derry up and running again. Thank you also to the Community Initiatives Program (CIP), Columbia Basin Trust and the Creston Valley Visitor Centre.

For more information and stories, stop by and see Derry on a Saturday this July. We are happy to share his exciting adventures, take pictures and celebrate by honking Derry’s old timey horn. The rest of the time he will be hanging around the Creston Museum waiting for visitors.