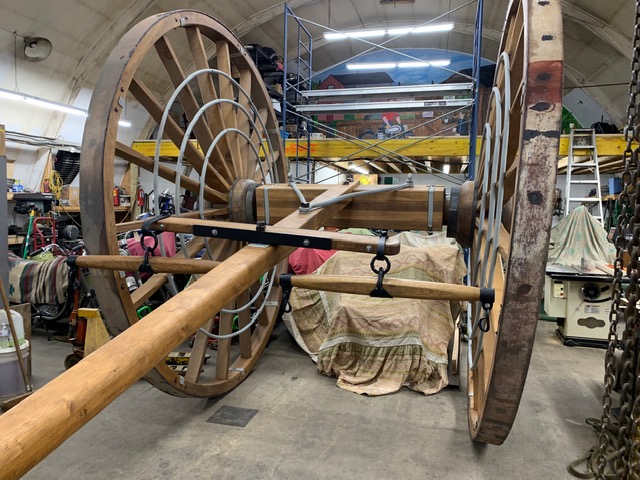 Brian Reynolds, the amazing wheelwright in Manitoba who has been rebuilding our circa-1908 logging arch, has it finished! Rebuilt. Reassembled. Ready to roll…right into town and, we hope, down the Blossom Festival parade route this spring.

First was the hubs:

We could not possibly have obtained large enough blocks of oak for those hubs – they’re 19″ x 20″ – so Brian’s first step was laminating three-inch-thick timbers into blocks, then roughing out the shape of the hubs before turning them on the lathe. Then came the precision-work of cutting the mortices (the slots where the wheel spokes will be inserted) and boring out the centre for the boxing (a metal sleeve that prevents the axle spindle from rubbing directly on the wood of the hub). The bottom photo shows the finished hubs, with original metal hardware, alongside the hub of an ordinary wagon wheel so you get some idea of just how huge these things are.

Step two: the wheels themselves.

There were lots of steps involved in this process, too: making each of the thirty-six spokes (18 per wheel), which first required making a jig so that each spoke was identical; making careful patterns for the felloes (the curved outer parts of the wheel) with a lot of math to figure out precise measurements and arcs, then cutting nine felloes for each wheel; making mortices in each one for the outer end of the spokes; and finally assembling the whole thing…twice.

Remember, these wheels are ten feet across, and each one weighs about a thousand pounds – precision is vital, but the sheer size of these things makes it all the more difficult to achieve. Brian measured the finished circumference of both wheels: there is a difference in size of one-sixteenth of an inch – phenomenal craftsmanship. As our technical consultant Jeremy Masterson of Remington Carriage Museum says, a wheelwright building an ordinary wagon wheel would be pleased to get that kind of accuracy!

These wheels were meant for hard work, skidding logs out of the bush. They have 1/2-inch-thick steel tires on the outside of the felloes, and three steel rings, called bumpers, on the inside of the spokes to protect them from impacts with the logs.

We’ve reused all the steel and iron hardware from the original arch, and in cleaning up the bumpers Brian found a gem: patent dates, marked on the four larger rings. Jeremy did some digging and found the actual patent: improvements in the form of a movable seat and bumper rings for logging wheels.

We know from advertisements for logging arches that Silas Overpack of Michigan, who produced the first logging arches, was the sole supplier of “Doxsie’s patented improvements.” We’ve had a lot of discussions over who might have built our logging arch; we know it came from Michigan, and it closely matched the specifications listed in the Overpack advertisements, but until Brian found those patent dates we could not confirm for certain that our arch was actually built by Overpack…but now we can!

Brian also noted some differences between the smallest of the three rings and the two larger ones on each wheel, and that there is no patent date on the small ones, which suggests they may have been added later, made by a wheelwright or blacksmith here in Creston.

Installing the steel tires required heating them to 800 degrees Fahrenheit so they expand three inches, lifting them over the wooden wheels, then cooling them off so they shrink back down and “draw” the wooden parts together. You can see the enormous pile of scrap wood Brian used for the bonfire in the bottom left photo above.

Here’s a video of the tire installation process, courtesy of Brian:

With the wheels complete, Brian could turn his attention to the last couple of bits that turn gigantic wheels into a functional logging arch.

The original plan had been to use a massive timber salvaged from an old bridge (top left photo), but once Brian started turning it on the lathe he discovered a thread of rot going through it – a significant compromise to the strength and integrity of the arch as a whole. So Plan B involved laminating chunks of the oak lumber left-over from the hubs and wheels into a piece large enough for the axle, and shaping it.

Then came the 16-foot-long pole (and when it’s turned vertically, as in the bottom photo, you really get a sense of how long that is), the hitch, and the final assembly.

Throughout this process, Brian has had to come up with some pretty ingenious solutions – from making jigs to aid in construction to inventing lifting tools and manufacturing custom hardware – in addition to writing the manual on how to build wheels this massive.

But it’s definitely worth it, because we’re finally ready for…

Step Five: Putting it all together!

There’s Brian, looking justifiably very proud of what he’s accomplished – and we are very excited to show it to you! Brian’s talking to suppliers about a correct-sized lifting chain to suspend a log underneath the arch, and then, once the snow disappears between here and Manitoba, he’s bringing it back here. we will definitely keep you posted on when that happens!

We want to thank Brian Reynolds of Haven Trading, Rapid City MB, for the incredible craftsmanship that’s gone into this project, and Jeremy Masterson of Remington Carriage Museum, Cardston AB, for an awful lot of historical and technical expertise. And a very, very big thank you to our funders and donors, without whom this project would never have even begun: