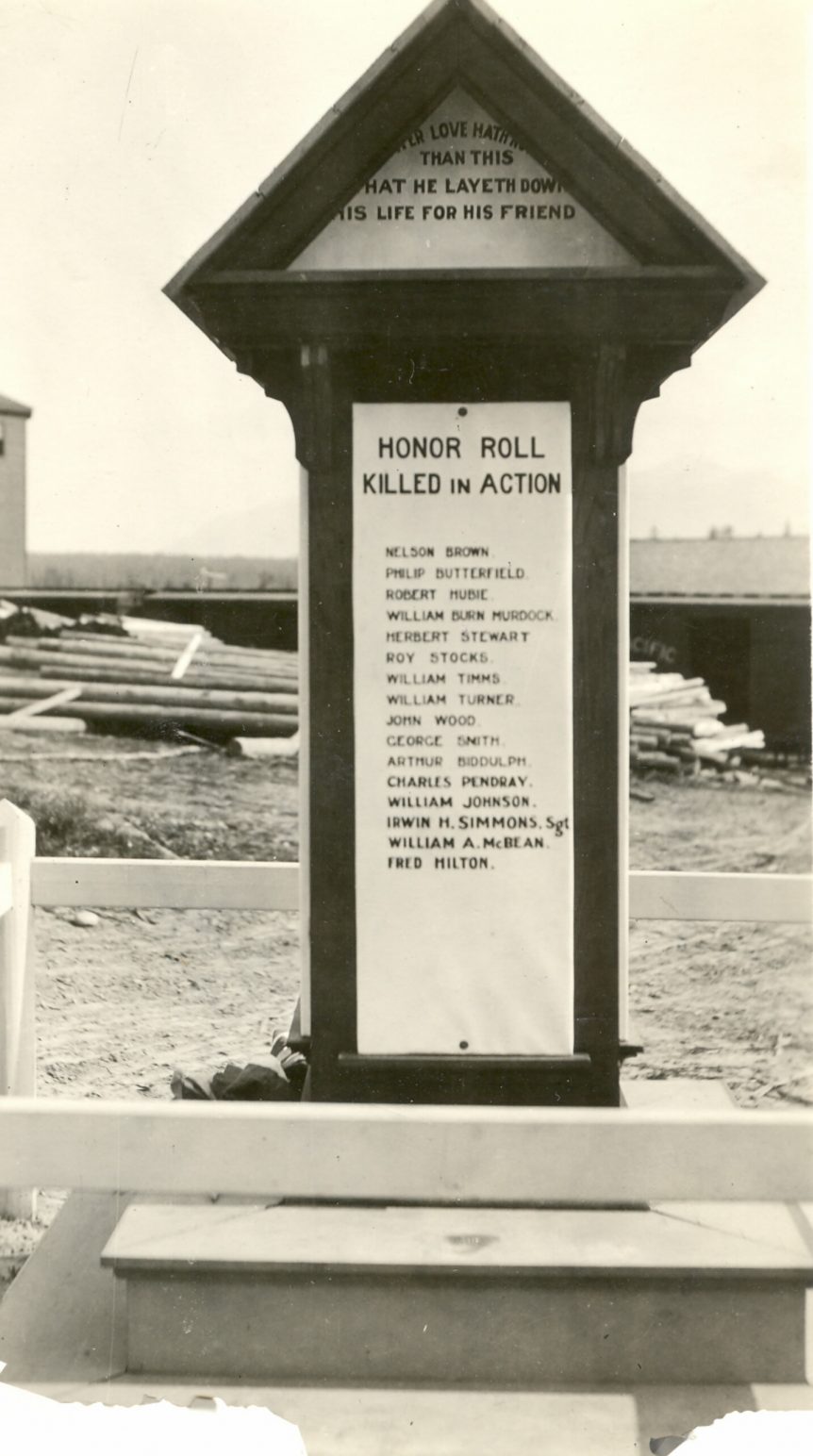 A couple of days ago, we shared the story of Creston’s cenotaph with you. One question you may be wondering is: What happened to the original one, the wooden one that stood near the corner of 10th Avenue and Cook Street?

It stood there for a short time after the stone Cenotaph was unveiled father up the street, but, in early January 1923, the Creston Review  announced, “The wooden soldiers’ monument that has decorated the bank corner since the early spring of 1917, was dismantled this week by officials of the local GWVA. The Shrine” as many familiarly called it, was quite unique in that it was the first soldiers’ memorial of any kind erected in the whole province. The monument has been carefully stored away by the GWVA, and will be kept as a Creston relic of the Great War.”

Where this wooden cenotaph might have been stored away in 1923 is anyone’s guess. Where it wound up after that is a mystery. The Great War Veterans Association merged with the Royal Canadian Legion in 1925, but we have no indication that the wooden cenotaph went with it. There was already some mystery in May 1926, when the Creston Women’s Auxiliary undertook to keep flowers on the stone cenotaph. The Review reported, “When the old wooden shrine was on duty there were two or three tin flower containers of generous size, capable of holding water, and the ladies would be glad to receive information that would enable them to locate these.”

Whether that means the monument itself had disappeared, or just the flower buckets, is unclear, but that’s the last time, that I could find, that the wooden cenotaph shows up in the newspapers.

The original wooden cenotaph is not the only mysterious monumental disappearance in Creston’s history. Here are a few others:

Machine-Gun War Souvenirs: In May 1919, the local Member of Parliament was advising the Creston Board of Trade to contact the War trophies Board at Ottawa to obtain any field guns or other “souvenirs of the Great War that Creston Valley may want for soldiers’ memorial decorative purposes.” Two machine guns arrived in early November 1920, and are probably the machine guns that the Library Board referred to in its letter to the editor debating a stone monument versus a memorial building in the spring of 1921. They were first put on display in front of the RCMP barracks on Canyon Street. In April 1926, “now that the RCMP barracks is being shifted to a new location on the other end of town, it seems likely that the machine gun war souvenir will find a new home in front of the Village hall on Barton Avenue.” After that, they disappear.

Canyon Monument to John Wood and Bobby Smith: About 1919, two plaques were installed at the Canyon school grounds, at the base of trees planted specifically for the purpose, to honour the two men from Canyon who were killed in World War I. These may be the “two brass plates” the Library Board referred to in its letter advocating for a memorial building. The plaque for Robert Smith was eventually donated to the Creston Museum and has since been returned to the Canyon community. There is no word on what happened to the other plaque.

Gold Star Mothers Shield: In November 1932, the Boundary Post American Legion of Bonners Ferry presented, to the Creston Valley post of the Royal Canadian Legion, a plaque honouring those mothers of the Creston Valley who had lost sons in the Great War. It was an impressive plaque: a silver shield about ten inches by six, with a gilt-framed scroll suspended from a chain that bore the names of the mothers. The one and only reference I’ve ever found to it is the newspaper’s announcement of the gift, which mentioned it was on display at Cresotn Drug and Bookstore.

World War II Honour Roll: In 1942, a wooden monument was erected alongside the post office on Canyon Street, bearing the names of everyone from the Creston Valley who had enlisted in the armed services up to that point, with a special section at the bottom for those who had been killed. There was considerable effort put into obtaining all the names: pleas appear in the newspaper quite regularly, alongside lengthy lists of the names already obtained. The monument itself, however, does not seem to have lasted long. We have no record of its removal or where it may have gone when it was removed. It does not appear in any accounts of two events that would likely have impacted it: the widening of the streets in 1947, or the fire that destroyed the Crawford Block on the corner of 10th and Canyon in 1954.