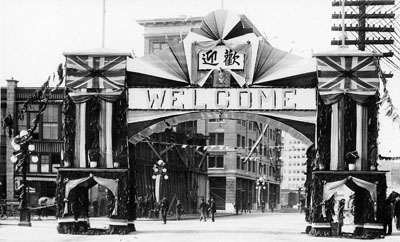 Yesterday, we marked Canada Day with a story about the evolution and adoption of the Canadian flag. For most of us, the flag is a symbol of strength, unity, progress, identity, and everything else that makes us proud to be Canadians.

For many people living in Canada – now, and in the past – the flag represents something quite different: oppression, isolation, expropriation, forced assimilation, expulsion.

Let’s take a closer look at that shield on the Red Ensign we showed you yesterday:

At a glance, this shield shows us the steady expansion of the Dominion of Canada, its relentless westward march to accomplish the vision of a single nation stretching across the entire continent. There are nine provinces represented here. Top row, from left: Ontario, Quebec, Manitoba. Centre row: New Brunswick, Alberta, Prince Edward Island. Bottom row, Saskatchewan, British Columbia, Nova Scotia.

But that nation-building came at a high cost. Seven of the provincial emblems include a symbol of England (either the lion or the red-and-white Cross of St. George); one shows the thistle of Scotland, and the ninth bears the full Union Jack. Where are the symbols representing the hundreds of other nationalities that were deliberately sought by the Canadian government, enticed to Canada to settle the west and make that grand vision of nation-building possible?

Two of the provinces on this shield, Alberta and Saskatchewan, were created at the expense of Doukhobor and other non-conformist settlers – brought here with the promise of religious and political freedom to meet the Canadian need for farmers, settlers, purchasers of Canadian industrial outputs – then forced to move on when those promises became inconvenient.

The ship in the New Brunswick emblem reminds us that all of us, with the exception of our First Nations neighbours, came here from somewhere else. It glosses over the fact that only people of certain origins were really welcome: British? Come on over! Scandinavian or northern European? Sure, why not! Italian, Jewish, Spanish? If we have to, but we’d really rather not. Japanese, Chinese, Hindu? Good luck with that.

Where are Canada’s First Nations people represented? Where is there any acknowledgement that they occupied the land before those settlers arrived, and that their traditional way of life was the first great sacrifice to nation-building? Hinted at obliquely, perhaps, in the presence of a bison in the Manitoba emblem – but that, in and of itself, is a representation of the destruction of the Plains Nations’ way of life.

Historically, these attitudes were built into far more than the flag. Immigration policies, as suggested above, played a huge role in the effort to keep Canada as “British” as possible, and the politicians who espoused those policies made no secret of their views. Residential schools forced the “Indian” way of life out of First Nations children, for no better reason than that way of life was “different” from the established British version – and different, in this context, clearly meant inferior. Even the mainstream public school system, unwaveringly British in every aspect of its outlook, reinforced the notion of Britain’s superiority and everyone else’s deserved subjugation to that vision.

Imagine going to school, in a country that told you it wanted you to come here, only to be reminded every day, in every lesson, that you somehow don’t measure up – that your homeland and your people are backwards, or savage, or unenlightened, or not worth mentioning in any but the most derogatory terms. You would probably quickly start to resent school, wouldn’t you? I’m sure I would.

We are still dealing with the legacy of these policies and practices in Canada today. Is there anything wrong with being of British heritage? No, of course not. But there’s nothing wrong with being of German, Italian, Jewish, Chinese, Hindu, Japanese, Pakistani, or First Nations heritage, either. Isn’t it time we acknowledged all the heritages that have shaped this country, and took steps to make sure the symbols we celebrate represent them all?